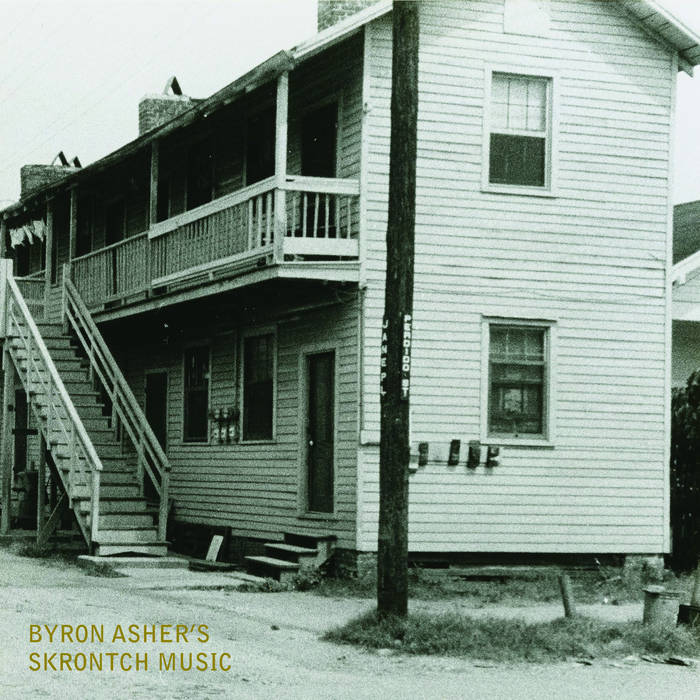 Skrontch Music is the ambitious debut recording by award-winning New Orleans-based composer and clarinetist/saxophonist Byron Asher. This five-movement, research-based suite for ten-piece ensemble explores the intertwined histories of New Orleans jazz and anti-Jim Crow activism during the early twentieth century. Skrontch Music juxtaposes contemporary composition with collective improvisation, archival recording sound collage, and excerpts from the 1896 Plessy v. Ferguson U.S. Supreme Court ruling. A contemporary investigation into the early jazz tradition, Skrontch Music highlights that the development of the music was itself a form of resistance to the racist Jim Crow regime.

The generative seed for this project came in 2014 from Asher’s desire to more deeply understand the socio-political roots of the traditional jazz that he was regularly performing. Research began with frequent trips to the Hogan Jazz Archive at Tulane University, where Asher combed through the oral history collection. Considering the archival findings in relationship to deep reading into the Reconstruction era, the rise of Jim Crow, and the attendant development of what scholar Clyde Woods terms “the blues epistemology” illuminated the underlying thesis of the project. Through an artist residency at Tulane University's A Studio In The Woods in 2016, Asher drew upon this research to compose Skrontch Music. The composition was further informed by Asher concurrently conducting an oral history project with members of the elder generation of clarinetists working in New Orleans today, including Dr. Michael White and Charlie Gabriel of the Preservation Hall Jazz Band.

Bassist and improvised music elder James Singleton describes the contemporary music found on this album as a continuation of the tradition of those early jazz musicians. "People have to understand: when Jelly Roll Morton, King Oliver, and Louis Armstrong were making their music, it wasn't traditional at all. It was radical, new, scary music, and I'm really thrilled that this piece continues that particular aspect of the tradition."

Asher made an intentional decision to assemble a multiracial, inter-generational, and multi-gendered ensemble of instrumentalists. It's a true cross-section of the current creative music community in New Orleans. Asher explains: "I knew that asking free improvisers to play with straight-ahead virtuosos, and for them in turn to make space for traditional players was maybe asking a lot, but the number one thing everyone had in common was the size of their ears and their openness to each others' expression. On this recording, it's as if the ensemble developed a collective language unique to this particular piece of music."

Blues Obligato opens the suite with the full ensemble collectively improvising alongside a collage of early jazz recordings, including pieces by King Oliver, Jelly Roll Morton, Mamie Smith, and Bessie Smith. This chaotic first gesture brings the listener into the world of the piece, landing them on a contemporary, blues-tinged, avant-garde-leaning journey of collective ensemble work. There are two improvised duets in this movement led by Aurora Nealand's Bechet-esque clarinet and the growl of Emily Frederickson's trombone and rounded out by Shaye Cohn's 1920s-era cornet sound and the dense chromaticism of Reagan Mitchell's alto saxophone.

The words of legendary New Orleans clarinetists Alphonse Picou, Albert Nicholas and Barney Bigard weave throughout the second movement, Aural History. A sound collage constructed of excerpts of oral history interviews culled from the collection of the Hogan Jazz Archive, accompanies this track, which opens with a minimalist-inspired, Steve Reich-ian passage and transforms into a lush, Ellingtonian ballad. As a clarinetist himself, Asher has long been fascinated by the importance of that instrument to the development of New Orleans music and wanted to showcase those instrumentalists specifically in the piece.

Comité des Citoyens, the third movement, is named for the activist organization based in the 7th Ward of New Orleans whose act of civil disobedience led to the 1892 arrest of Homer Plessy. The angular up swing of this movement is intensified by text from the 1896 Plessy v. Ferguson Supreme Court ruling, recited by members of the ensemble. All of the clarinetists quoted in the previous movement and many more were born and raised in the same neighborhood, and Asher himself lived there while writing Skrontch Music. He notes, "It's a special place. There was something that was happening at the time that led to both political agitation and artistic excellence, and I wanted to address that duality." Fiery and virtuosic solos from tenor saxophonist Ricardo Pascal and pianist Oscar Rossignoli undergird this movement.

The final two movements, Elegy and After this/that, bleed from one into the next. First, there is a tone of reverence, an opportunity for the listener to digest the dense content of the first three movements. The written music slowly bleeds into collective improvisation by the full ensemble, which, in turn, fades into a solo piano ostinato that leads into the fifth movement. The melodic content of After this/that is built upon the ever-present foundation of that piano ostinato and is indebted to contemporary large ensemble writing in the spirit of Darcy James Argue. This movement also affords the most space for solo improvisation, including a sinewy clarinet solo by Asher himself, his only solo moment in the suite. Other solos include an explosive bowed statement by bassist Singleton, and explorations by Mitchell on soprano saxophone and Nealand on alto saxophone.

Skrontch Music borrows its name from a lesser-know swing era dance step, the Skrontch, which Duke Ellington featured in his show at the Cotton Club in the late 1930s. The lyrics to Duke's 1938 recording of Skrontch instruct us: "Skrontch on the four beat/Skrontch then you repeat/Skrontch up on your toes/And then start to cover ground." The emphasis on beat four propelled a dancer into the next measure of music, and like the step, Skrontch Music pauses in the here and now, looks back from where we came, and steps forward.

Skrontch Music was written during a 2016/2017 artist residency at Tulane University's A Studio In The Woods. The recording was funded by grants from the New Orleans Jazz and Heritage Foundation and the Puffin Foundation as well as an independent fundraising campaign. Thank you to all who contributed financially to this project. It was premiered at Xavier University in New Orleans in April 2017.

Bandcamp Daily  your guide to the world of Bandcamp

MF DOOM is given his flowers, plus appearances from MC Jada Imani and Stanley Ipkuss